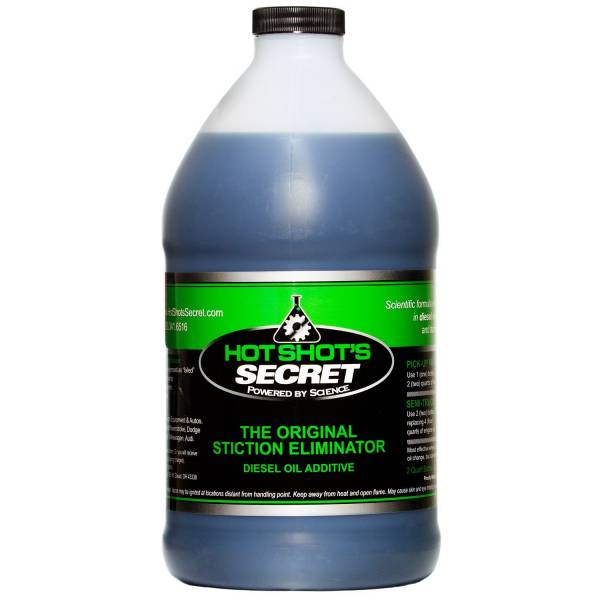 Scientifically formulated to eliminate the stiction build-up that causes most injectors to fail. Pour one treatment of our Original Stiction Eliminator into your oil BEFORE replacing your injectors. In less than 4,000 miles you will see, hear and feel the difference as your injectors come back on line. And you'll save thousands of dollars by not replacing injectors that weren't broken to begin with! Recommended for ALL diesel engines.

If you have a diagnosis of a failed injector, then Hot Shot's Secret Stiction Eliminator will fix this problem, even if the injector is at the point of not working. Stiction Eliminator is a combination of detergents and dispersants that clean up the carbon and oxidation inside the injector. It also contains additives that make the motor oil work better. Friction modifiers and viscosity improvers make everything run smoother, with less friction and acid neutralizers help to prevent the built up soot in your engine oil.

We have been testing Hot Shot's Secret since 2004 and have found it to be 86% effective. Trucks having problems were hooked up to a diagnostic computer and tested. Computer analysis showed anywhere from 1 to 6 injectors needing replacement. A treatment of Hot Shot's Secret Stiction Eliminator was added to the engine oil. The trucks were run only 100 miles and then the computer analysis was repeated. 86% of the time, the analysis showed all the injectors were back online. The owners noticed more power and a smoother running truck. The other 14% of the trucks showed improvement also, but not a complete cure. Most of the time, the diagnostic analysis showed that 4 injectors needed replacement before treatment. After Hot Shot Secret Stiction Eliminator was added to the engine, the analysis consistently showed only 1 injector needing replacement.Recommended for ALL diesel engines.

Add Hot Shot's Secret and your diesel will have:Typical Applications and Mixtures: